How to Protect Your Plumbing from Tree Roots 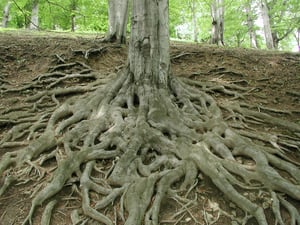 Pipes are a nutrient oasis for tree roots. Why? They contain oxygen, nutrients, and water, things the roots naturally seek. Vapor from the pipes escapes to the outside soil and the roots grow toward the moisture in the pipe. If it can, the root will find a crack or small hole in the pipe and then grow—which widens the hole in the pipe and makes things worse.

Once inside, the root will continue to grow which then acts as a collector of toilet paper and waste, causing blocks to the line. Eventually, the clog will completely block the flow and make a big mess as well as a costly fix.

Fortunately, there are four ways to help prevent these problems before they start. Here are tips for how to protect your plumbing from tree roots:

Remove Tree Roots From Inside Using an Auger

One way to prevent tree roots from causing havoc with your plumbing is to use a mechanical auger. Never heard of one? It is a device with a rotating spiral head which snakes down into your plumbing system, shearing the roots that have entered the circumference of the pipe.

Although this is an affordable prevention; unfortunately, it is not going to resolve the issue permanently. It cuts the roots, but it doesn’t kill them, so the roots will simply grow back into the line which will be cause for another run with the mechanical auger. Depending on the severity of the problem, this could be a “rinse and repeat” process until your auger rusts, you kill the tree, or try another method.

Copper sulfate crystals are a common way of killing tree roots without harming the tree itself. They can be purchased at garden supply stores. Simply pour a half cup into your toilet and flush until the crystals have emptied the bowl. Make sure you pay attention to the label warnings and avoid contact since the crystals are toxic! RootX is another chemical application which is applied into the toilet. Both these solutions protect the pipe by acting as a poison which makes the pipe and the surrounding soil around it off limits to tree roots, which die before reaching the pipe itself. If you end up needing to call a professional plumber, just be sure to let them know you've used chemicals.

Use a Hydro Jetter

One of the more expensive but thorough options is a hydro jetter. This machine streams high pressured water into your piping.  Sometimes at the end of the nozzle is affixed a spiral tip. When both the force of the water as well as the metal wires work inside the pipe, the tree roots don’t stand a chance and are sheared and pushed out of your plumbing system, however, if you have been paying attention, you will have the same issue as when you use a mechanical auger: the problem repeats itself when the tree roots grow back. Having said that, using a hydro jetter and then applying a chemical solution above could be the perfect gambit.

Dig Up the Roots

Because of the time and effort as well as the mess, digging up the roots is your last option and is usually done if the pipes are too damaged to be fixed. In this case, the piping system would have to be replaced. Having said that, a professional can do a camera inspection of the system which will allow him and you an opportunity to see where the worst damage is, so that you don’t have to dig up your entire yard. As part of replacing the pipes, the roots of the tree can also be removed once and for all.