Can I use a higher watt bulb than recommended? 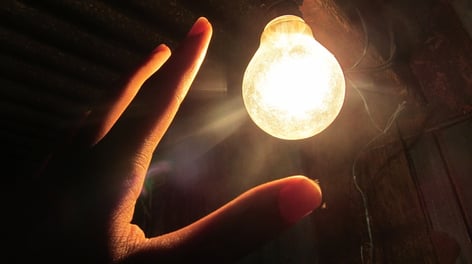 Let’s say you want to brighten up a dark room. You purchase a bright 100-watt incandescent light bulb, but when you go to screw the first bulb into your lamp, you notice it has a warning label that says “Maximum 60 Watts.”

“Well,” you think, “What’s the worst that can happen?”

The short answer: a home fire. And even if the bulb is removed before a fire starts, the overloaded current can do permanent damage to your wiring.

Let’s take a closer look on why this is:

Why can’t I exceed the recommended wattage?

A watt is not a measure of brightness, though we often think of it that way. It’s actually a measure of energy (specifically, the number of joules per second passing by a particular point at any given time). So it’s measuring the amount of electricity flowing through the wires and the bulb itself.

A light fixture’s maximum wattage often reflects how much power can go through before the wires get overwhelmed by the current and fail (i.e. start smoking or burn up).

If a fixture is rated for a maximum of 60 watts, then it’s dangerous to exceed that. A 100-watt bulb will draw more power through the wires than they safely can handle.

(It is okay, however, to put a bulb with lower wattage in that fixture—drawing less than the wire’s maximum load isn’t a problem.)

Some specialty lamps or other fixtures may have even lower watt ratings for other safety reasons. For example, if you’re working with a recessed can light in your ceiling, or a lamp that has a plastic or fabric shade that’s very close to the bulb, the recommended wattage may be much lower to prevent a hot incandescent bulb from overheating and potentially igniting those materials.

What about LEDs and CFLs equivalent to higher watts?

Traditional incandescent bulbs are notoriously inefficient, converting only 5% or less of the energy being consumed into visible light, and converting the rest of it into heat.

LED and CFL bulbs, on the other hand, are far more efficient, creating the same amount of light while consuming only a fraction of the energy. (That’s one of the reasons they cost so much less to power than traditional bulbs!)

For example, a 14-watt LED may be able to give out the same amount of light as a 100-watt incandescent bulb (about 1600 lumens).

Most of us have no idea how bright 1600 lumens is. But many of us do have some idea of how bright a 100-watt bulb is. So manufacturers often include that number on the LED or CFL packaging as well—to help customers choose the right brightness for their needs.

Remember this number is just for the consumer to use as a comparison. It has nothing to do with the amount of energy actually being consumed. Even if the package says it’s equivalent to 100 watts, a 14-watt bulb is only using up 14 watts at a time, meaning it’s safe to place in a fixture with a rating higher than 14W.

So to go back to our original example, to brighten up a room, it would be dangerous to place a 100-watt incandescent into a lamp rated only for 60 watts. However, you could use a 14-watt LED or CFL bulb that's marked as equivalent to 100 watts, which would give out the same amount of light while staying far below the maximum wattage.